So, a few days ago Weston spilled millet all over the kitchen floor. I wasn't that sad, because lets face it - even a health nut like me can't figure out much to do with millet. (Although as a complete aside, I do love millet bread.) But I was irritated with the mess, so I decided that Weston could just clean it up himself. I got out the light cordless vacuum and let him go at it. You would have thought I'd given him a triple scooped ice cream cone. He was in heaven! He's always had a fascination with vacuums that I will never understand, but I figure I should use it to my advantage. He actually did a pretty good job. Here's the little guy in action... 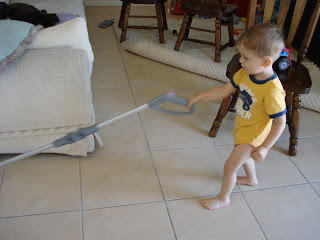 You may notice that all the chairs had been moved - that's because he wanted to vacuum under the kitchen table too! 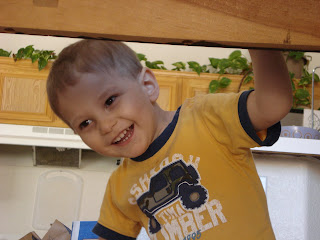 I figure he's the perfect guy for the job, because he's still short enough to almost fit under there... besides, look at that happy face! He even went to investigate a few times when it seems something had become stuck... 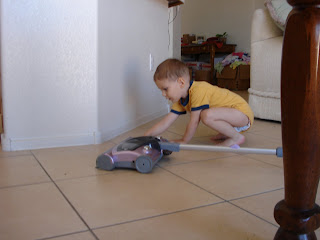 I could hardly believe how well things were going, until I found him drinking on the job. 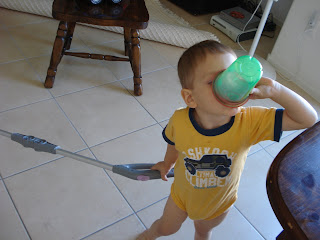 He had so much fun that he even went to the effort of putting toys away that were in his path! I'm not going to lie, it was marvellous. When we were all done I went to quickly to do something in the office, and when I emerged, this miraculous sight was mine to behold: 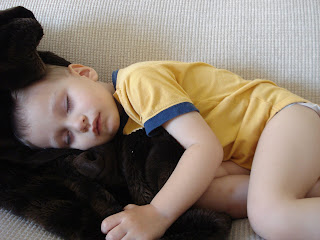 For the first time in his entire life, Weston crawled up on the couch, and put himself to sleep! Yeah, I'm still waiting for a repeat on that one. :) Needless to say, it was a good morning.
Posted by Michelle at 9:12 AM

I love those Sharkb vaccums for kids. Thumbs up!

I'm jealous, last night I tried to have Z help pick up her toys and she cried like they were going in the trash. I love the sleeping picture on the couch, very cute.

Awesome. AWESOME!!! Katie and I still maintain that our parents had kids simply because they were tired of doing the dishes themselves. Nothing like homegrown slave labor!!! You can bet I'll be trying this trick when Camryn's old enough to walk and work at the same time!

i just love the one of him peeking under the table. anna too loves cleaning up her messes. sometimes i wonder if she dumps water on the floor, just for the privilage of wiping it up!!! 2 year olds are funny huh!?

I sent a card to you already at the Leonor address that was on your Christmas card. Will it still make it to you?

What a CUTE post! I especially love the part about "drinking on the job." Haha. Hopefully he'll keep us this helpful attitude - and ability to take naps on his own. :)

Kenny has a love for the vacuum too! And Lexi enjoys a good session with it every now and then too. Kids are crazy. . .

How funny! I love you! It's okay you forgot on sunday.