Some people grow up in a place they love.  They graduate high school, move away for college to embark on life as an "adult," and come home to visit for holidays and in between semesters.  They come back home to the awesome place they grew up, enjoy their family, reconnect with life-long friends, and get to go to many of the places they did while growing up.
I am lucky in that I did grow up in a beautiful place that I loved very much, but when I left for college, my mom moved to Las Vegas.  I am grateful that she moved to Las Vegas because of the incredible friendships and experiences I have had here, but because of it, I have rarely gone back to the O.C.  In fact, although I have been on a couple of hurried day trips to various parts of Cali with the youth in recent years, I haven't actually been back to the paradise where I grew up for 7 years...until this week.
Jason had a business trip and would be staying at the Irvine Marriott.  How could I resist a free hotel stay?  I had an ocean view from my bedroom window as a teenager in Dana Point, yet my children had never even seen the ocean!! I have been so overwhelmed lately.  I mean, SO overwhelmed.  I almost didn't go because my head felt like it might explode from all the things I had to do.  But then I just closed my eyes and thought, "what would mom say?"  Immediately I heard her voice in my head saying, "Go!"
I had little time to plan, but I figured it would be worth it, even if I only was able to see one good friend and take my kids to the beach for a little while.  I was right!  It was so awesome.  Everything about being there soothed my soul!  I wanted so badly to stay longer ~ my heart literally ached when it was time to leave.  Somehow, I felt like my mom was there, soaking in the beauty and enjoying the whole experience right along with me.
I was surprised how at home I felt, even though I moved away 17 years ago!  When I was there it felt like I had been gone just a little while, like I belonged there.  I had that feeling you get when you see a close friend after years and it's as though no time has passed at all...like being together is the most natural thing in the world.
I felt my mom there, and it made me miss her more once I came home. It was also incredible reconnecting with a few friends...it was comforting to be with people who have known you through multiple stages of your life...something that I guess I missed out on to an extent when my mom moved away.  And, I'm sure it doesn't help that I've moved more than 15 times in the past 17 years!
On our way, we stopped in Baker to eat at the Mad Greek where I snapped this pic - aren't they cute? 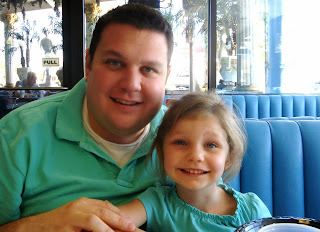 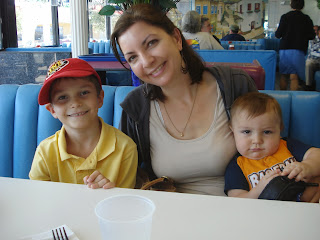 On Monday night we went to visit Bruce and Patti Spencer, who have been dear family friends for as long as I can remember.  I must have been just a girl when Patti and my mom met! For some reason I didn't take any pictures that night, but we sure did have a lovely time visiting.  And the kids really thought all their instruments were neat. :)
Tuesday morning we went to visit the Bells...Barbara (in the picture below) was both a seminary teacher and my piano teacher during high school.  When I left for college she had just had her first baby - Lauren, the pretty girl in the next picture... 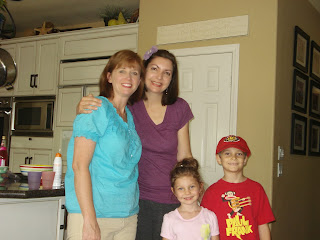 I wish I could have captured the moment when Brighton was grabbing Daisy's face, it was a cute moment! 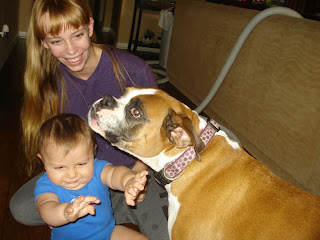 After a brief but lovely visit at the Bell's home, we met up with Chad and Karen George and headed over to Doheny Beach.  They brought food, towels, and everything necessary for a perfect afternoon (including themselves)!
Despite a slight obsession (as evidenced by at least a hundred questions) with the possibility of a tsunami on the California coast, the kids immediately fell in love with the beach...how could they not!? 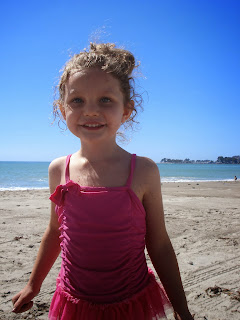 How I miss this...sitting on the beach, just letting all of your troubles be washed away by the waves.  There's nothing quite like it!  Weston was a little squeamish about going out into the water (even up to his ankles) at first.  In fact, when I asked him what he thought about it shortly after arriving, his comment was, "I really like the beach other than the waves!"  Silly boy!  By the time we left he had decided that he liked the waves after all. 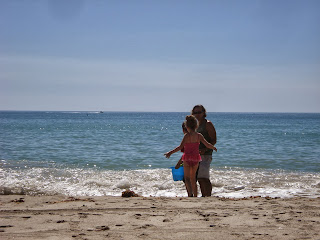 I guess it goes without saying, but I was just thrilled to watch my sweet kiddos enjoying their time that day!  And due to some generous people along the way, they had plenty of toys to play with in the sand. 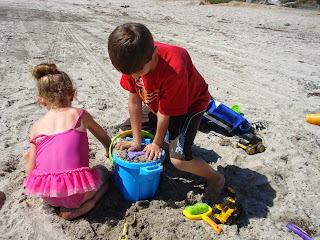 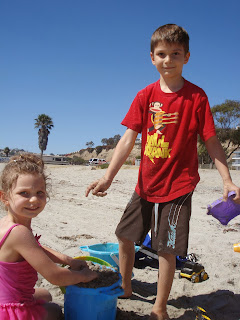 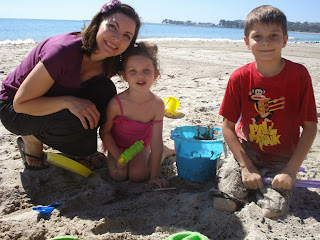 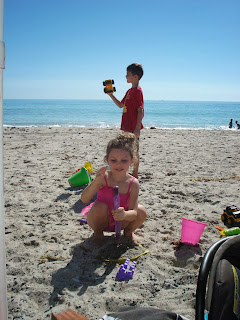 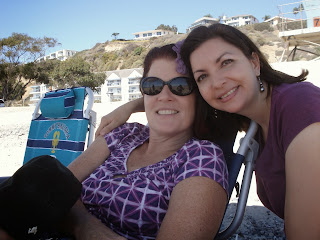 Chad and Karen's lovely daughter, Sophia, hanging out with Sophie.  Their son, Campbell, was also there, but (sadly) I didn't get him in a pic! 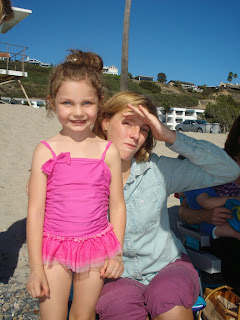 Playing on the tramp...Brighton pretty much had the time of his life.  And yes, he is eating pine needles in this picture! 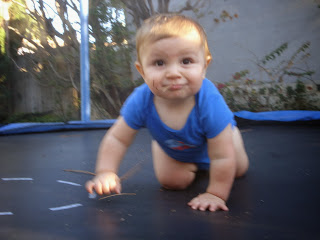 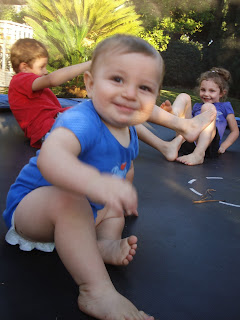 I'm still trying to figure out where they saw people dancing this way...but it sure is cute. :) 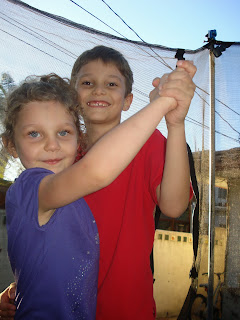 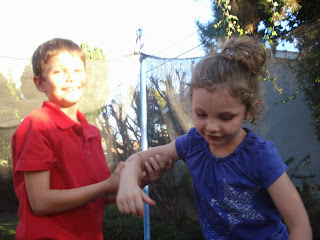 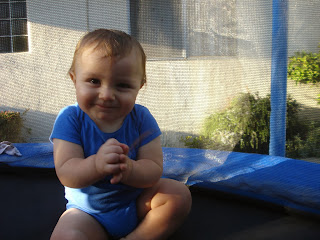 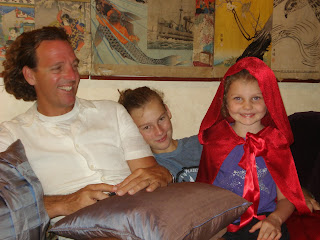 Since Karen's birthday was the next day (Sept. 25), Weston made her a picture (rolled up into a scroll).  What I found so funny was his response when Chad asked him how he wanted to tie it.  He offered a few suggestions like string or ribbon, but Weston insisted on a wax seal.  The average family may not happen to have sealing wax and stamps on hand, but of course this would never be a concern at the George's house!  So Karen's card was sealed with a "P," for pirate of course! 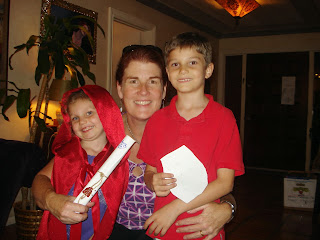 Although it was late by the time we left, I decided that since we were on vacation, we'd stop and get some food.  We ended up going to the Denny's right by my high school, which was practically empty.  Even though I wasn't a Denny's regular in high school, it was still so fun to be there. 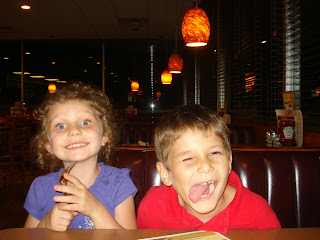 The kids were particularly excited because I let them get a strawberryshake.  It really is the simple things... 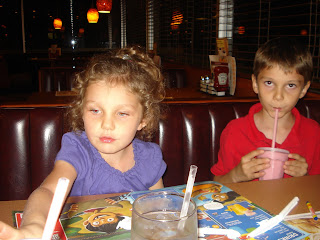 Brighton was a good little munchkin and only dropped 3 or 4 pieces of silver wear on the floor. :) 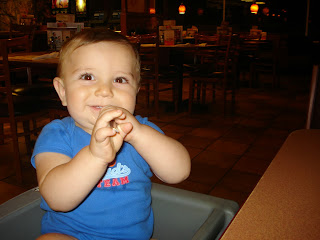 As we drove back to the hotel that night, I got that awful feeling in the pit of my stomach. You know, the feeling you get when you are being separated and you really don't want to be.  It is the same feeling I had while driving away from the Nye's house after saying goodbye just before they moved in July...and the same feeling I get whenever I think about watching my mom slip away from me.  I just hate saying good bye!  It's not my thing!  The only way I can handle it is by thinking, "until next time."  Suffice it to say, I am already looking forward my next California trip.  And I already have a plan for some of the places we will go that we missed this time. Can't wait!
Posted by Michelle at 7:19 PM

Michelle. I didn't know you were from southern CA. Or maybe I did. Where and when did you live in CA. I went to Dana Hills High School '94.