I have at least 15 awesome, witty blog entries in my mind waiting to be written. Life is endlessly busy, and there seem to be so many high priorities that get neglected at least part of the time... well, today I was just trudging along feeling somewhat defeated by the ever growing to-do list when I received a wonderful phone call! It was my husband (who still shows up on my cell phone as "love churro" because of a silly game we used to play while we were dating where we would invent terms of endearment out of food items. I think the best one of all was "greasy love chicken"... but I digress)
To cut to the chase, Jason had called to let me know that his brother had received his mission call today. You guessed it, he is going to Argentina ~ to the Buenos Aires West mission. I am so EXCITED!!! This is a wonderful day. I love my brother in law, Chris, and I have secretly been hoping he would go to Central or South America - not just so we can speak to each other in Spanish while the rest of the family has no idea what we're saying, but because there is something so very special about those crazy Hispanics! Plus, my own brother went to Argentina. I don't know what it is, I am just so thrilled. I almost cried when I heard the news!
What a great day. Here's a pic of Weston chilling with his Uncle Chris on Thanksgiving: 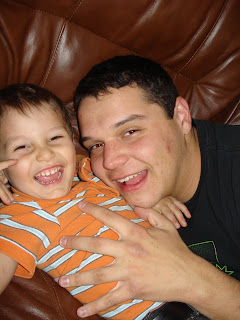 I love your new banner. What a beautiful family you have!

I, too, love the new banner. Such a cute family. Sophie is so beautiful!

Oh, and I need your current address for a Christmas card! Bobbybloo(at)gmail(dot)com

How awesome!!! My heart swells a little each time I see a new missionary go out--I think of how grateful I am that several elders answered the call to the Oregon Portland mission and found my family. How amazing to think there are families in Argentina who have no idea how blessed they're about to be!

Oh, and I'm with Courtnie--I need your address, as there's a fabulous Christmas card just waiting to wing its way to you! Mam262(at)gmail(dot)com.