Our drawn out Halloween and AWESOME pumpkins!

Halloween has never been as eventful as it was this year! It began the Wednesday before, when I got to chaperon the Stake youth Halloween dance, which was ridiculously fun. Here is a picture of Lara and I representing the Harmony Hills ward... dressed as nerds (like you needed an explanation!) Jason told me after looking at this picture that it almost seems like I was going for the "hobo" nerd look. Wow, does it get any worse than that!?
(by the way, that is nasal spray there on the lanyard around my neck!) 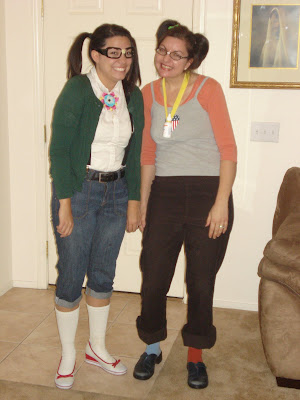 The next day Weston had his Halloween party at school. He had planned to be Spider man, but when the teacher requested that the kids wear costumes that allowed them to still go potty by themselves, we had to switch plans. Weston was Elmo last year, and convincing him to be Elmo at the school party was actually much easier than I thought it would be! 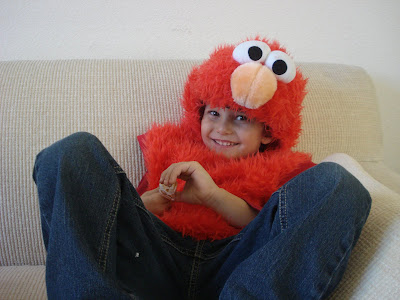 He was pretty thrilled with all the candy he brought home, but not as thrilled as Sophie! 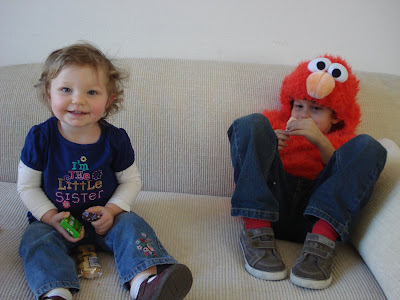 Sophie hasn't ever even tasted candy before, and yet she instinctively knew that she HAD to have it! Here she is digging through Weston's bag, dishing me up a darn cute camera smile! 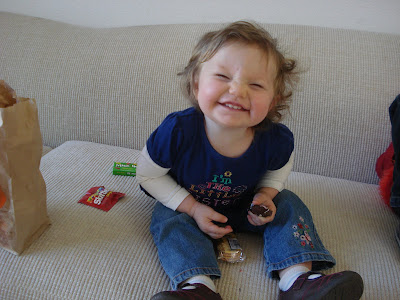 The next night, on Friday, I took the kids and met up with both Grandmas and Aunt Shae-Leigh at this super cool carnival/festival activity in my mom's Stake. This, again, was Sophie's first real exposure to Halloween activities (she was only 2 months old last year) and yet she "trunk or treated" like a pro! If I believed in re-incarnation, I think I would have to believe Sophie was a professional candy beggar in her previous life... it was truly impressive! Here's my little "fairy" in action: 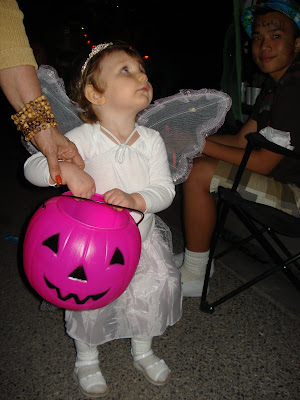 This tiara was actually the one I wore the day we got married! 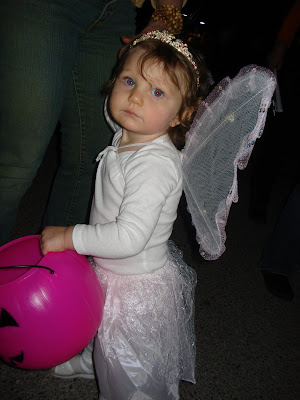 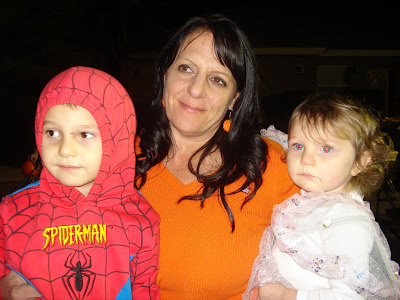 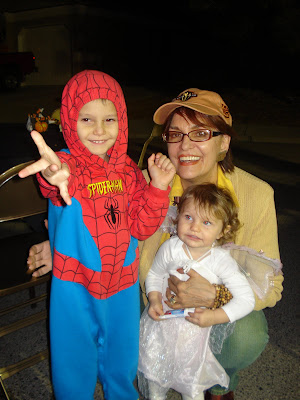 Weston wasn't in the best of moods... we kept offering him food, which he did not want. Finally Auntie succeeded in getting him to eat cotton candy! (I'm sure she really had to twist his arm!) 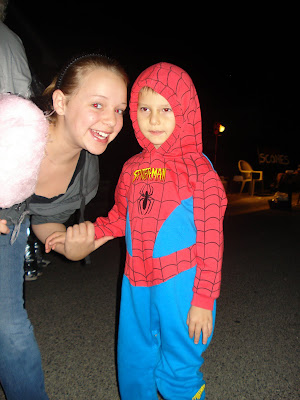 I couldn't seem to get enough pictures of my angelic little fairy! 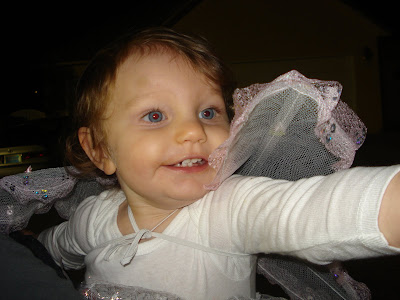 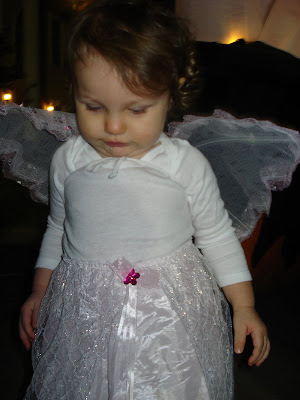 Saturday morning was pumpkin carving time! Jason is a pumpkin carving genius. Usually he does something really difficult - for example, he did President Monson last year and President Reagan the year before that. This year his pumpkins weren't quite as elaborate, but they were still extremely impressive I thought! 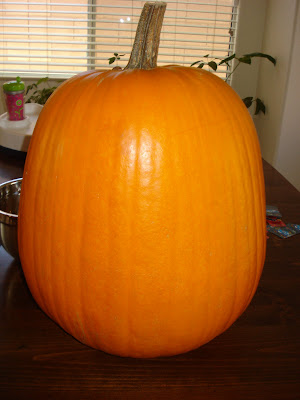 Hard to believe that pumpkin was transferred into this: 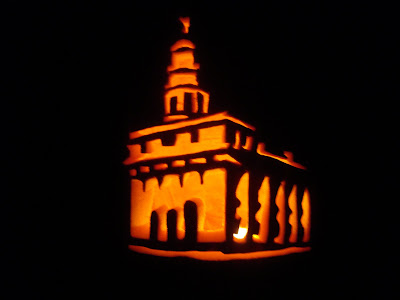 This second pumpkin was done, of course, at Weston's request. 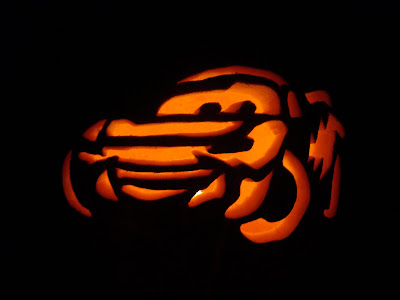 While daddy carved away, the kids found all kinds of treasures in the garage. (We still haven't unpacked everything that we recently got out of storage) Here is cookie monster from when my brother was a baby like 35 years ago. Now that I mention it, he may want that back. All I have to say is that he'll have to fight Sophie for it! Judging by her hair, I think she had just woken up from a nap in this photo. 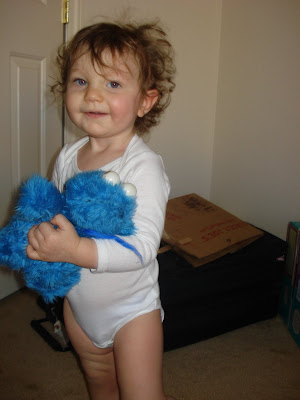 Jason's dad gave us some various Halloween novelties and decorations including this skull which, when you pull the lever, opens it's mouth, belches, and then says (in a British accent): "Pardon me!" Weston pulled that lever at least a thousand times, or so it seemed. He was so BORED waiting for Jason to finish Lightening McQueen. He eventually fell asleep while waiting. 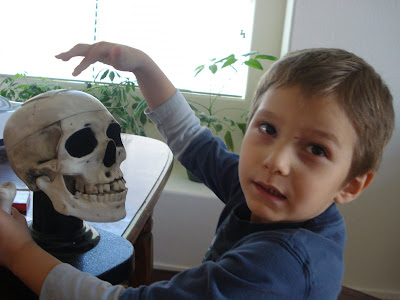 But not before discovering his Nemo costume from a couple years ago! The second he laid eyes on it, his formerly intense need to be Spider man for Halloween completely vanished. 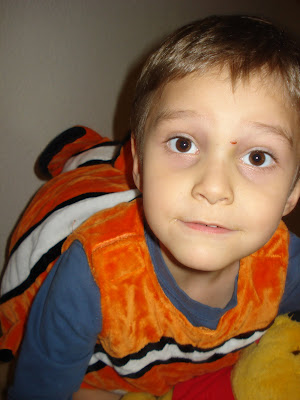 While in the Nemo costume, he also rediscovered his "hulk hands" that Uncle Chris (who is currently serving a mission in Argentina) gave him for his second birthday. He got so crazy with the Hulk Hands that I ended up having to take them away, but I'm sure Uncle Chris would be proud! 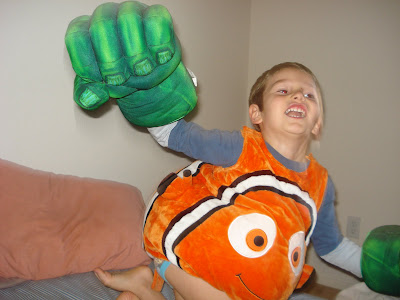 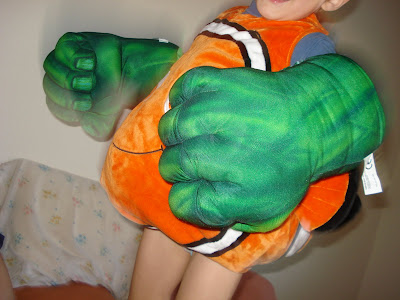 Oh yeah - and Winnie The Pooh, formerly a character of no interest, suddenly emerged as a new favorite for both the kids too upon finding the Pooh bear and the Pooh sing along book! 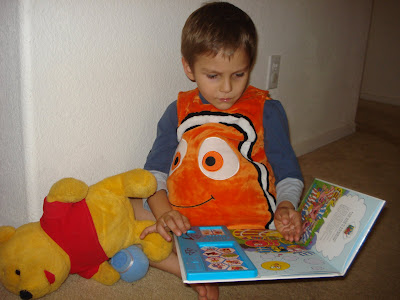 Ironically, the "real" Halloween activity - our own ward's Trunk or Treat, was a huge disappointment. We didn't even take any pictures. We just came home and watched Jason's favorite movie of all time - Ghostbusters!
However, the next night (we're talking day 5 of celebrating), was REAL Halloween. So, we went to visit Grandpa and boy did he let Weston load up on goodies! It was fun. 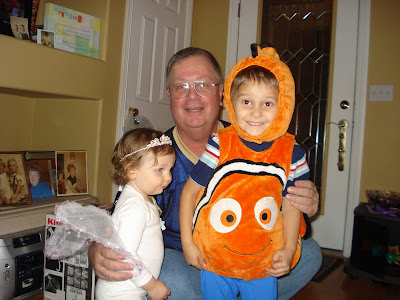 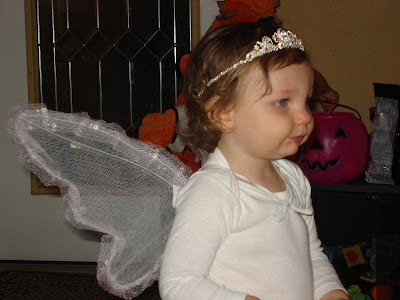 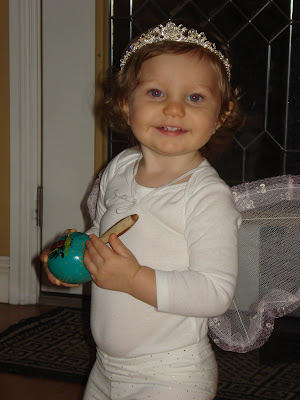 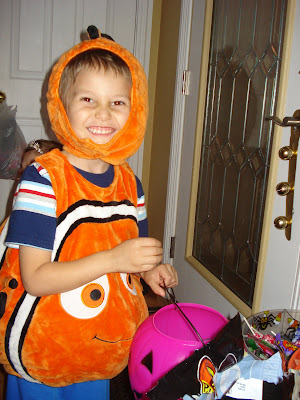 I think my favorite part of Halloween this year - besides Sophie being so darn cute that I melt every time I look at these pictures - is the fact that Weston got to dress up in all of his different costumes at least once. I never really cared much for Halloween before having kids - but now I genuinely look forward to all of the traditions we have created around it. I have managed every year to be very lucky when it comes to great deals on costumes... who knows, maybe next year I'll get ambitious and even make my kids' costumes! (Well, stranger things have happened, you know.)
Posted by Michelle at 10:39 PM

Those pumpkins are amazing!!!

You're kids are so stinking cute.

So cute. Love all your pics, especially Sophie!! What a doll!

So do you remember that Halloween in Pasaic??? Hahaha. Brimhall was SUPER scary! I gotta pull those pics out!

Okay--first of all, HOW do kids know what candy is?!? My daughter won't touch a THING at dinner, but if she even spies the corner of a piece of candy, she's all over it! But then, we could encase her dinner in a candy wrapper and she wouldn't touch it. This confuses me.

Second, your Sophie is beyond precious in that angel costume!!! Oh, the wings! Oh, the tiara! Oh, that pleading look for MORE CANDY!

Third, I wish we could hang out more--I KNOW Karl and Jason would get along! Especially since "Ghostbusters" is one of Karl's and my favorite movies as well!

And lastly, my roommate in Paris went as a nerd for Halloween...by borrowing some of my clothes. Nice.

holy jason! i love all of the pictures! i am with you on all of the fun traditions!