We have never taken the kids to see Santa at the mall before, for a number of reasons. Weston's first Christmas allowed us the opportunity to introduce him to Santa at a friend's Christmas party... which didn't go too smoothly since he was terrified. Since then, it just never seemed like it would be worth all the effort to go clear across town, wait in a super long line with either one or two cranky kids, and then pay $20 for someone to take a picture that I will never display in my home. This is the one Christmas tradition we have never experienced, but on Monday we thought it would be a fun FHE activity (and after watching Elf again recently I was tempted to tell Santa that he smelled like beef and cheese, but refrained.)

It was a fairly uneventful excursion except for the fact that Monday was "bring your pet to take a picture with Santa" night. Does that seem odd to anyone besides me? Fortunately there were no creepy pets around like rodents or spiders - all we saw were doggies, and the kids LOVED that! They made us sign a waiver in case someone got bit, scratched, or otherwise harmed by an animal... what a weird world we live in! What I found even more odd, though, was the "save the planet" coloring book the Santa handed to the kids as they left. I'm mischaracterizing it just a little bit, but the book definitely had an agenda... and it had NOTHING to do with Christmas.

Anyway, the best part was that the guy "playing" Santa was in fact a jolly old man with a REAL beard! 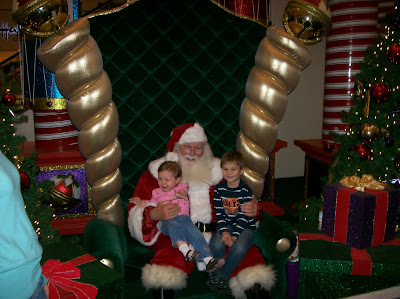 Sophie wasn't having anything to do with Santa, but Weston happily reported to him that he wanted spiderman gloves. Afterwards, he seemed really disappointed. We soon realized that he was sad to only have something like 30 seconds with the bearded fellow. :( 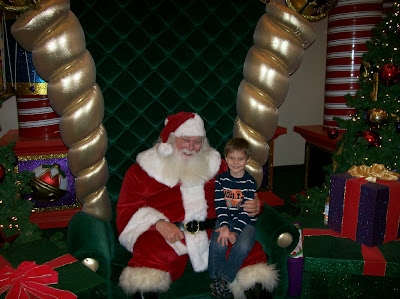 Fortunately, his mood quickly turned up again at the sight of the various little kid car rides you can put a quarter in and "drive." They even had a helicopter, which I thought was cool. Here's a picture of Sophie on the helicopter: 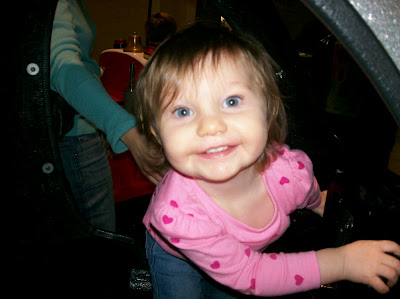 Overall, it was a lovely time. And Kudos to Jason's dad for taking these cute pictures - in all my brilliance, I had totally forgotten to grab my camera (although I did end up with the camera case in my purse)!
Posted by Michelle at 7:57 PM

Yeah...I will never brave the mall with two kids in tow, just to see Santa.

But props to you! The picture turned out fun, there is always a scared child. I am afraid Rylee will do the same thing with her first experience with Santa.

I LOVE IT! Lol. We havent ever taken Bro to a mall santa either. Sounds like it was a pretty good experience though. I LOVE YOUR FAMILY PICS!!! You silly girl. Its so funny to me how people dont like pics of themselves!!! I love LOVE love them!!! See ya tonight lady!!!!

What GORGEOUS family pictures, Michelle! Glad to see you guys are enjoying this wonderful season! Merry Christmas to you! :)