Trip to Salt Lake, Part One

The last Thursday in April, we took off for Utah. The kids were SOOOOO excited!! All morning Sophie kept saying "me ready, go Utah NOW!" Weston also sounded like a broken record. When we pulled into St. George for a pottie break he asked if we were there yet. The kids were anxious, because they knew they would get to see some very special people who they love! The first people we got to see were the Olsens, our dear friends who we miss so much. They were gracious enough to let us stay with them while in the great state of Utah
(Jason would vehemently disagree on the use of the word great in that sentence... he has a SERIOUS mental allergy to the state).
The first evening we were there, Emma (age 5), was reading with her mom when Sophie just jumped on in! Emma is such a sweetheart - like her mom, Stephanie (one of my most favorite people on the planet) And Sophie felt right at home... 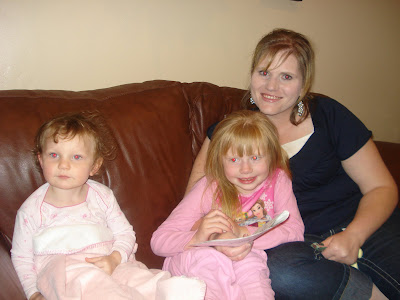 The kids had an absolute BLAST playing together. Weston had such a great time playing with Emma and Hope that he told me they were his new best friends! 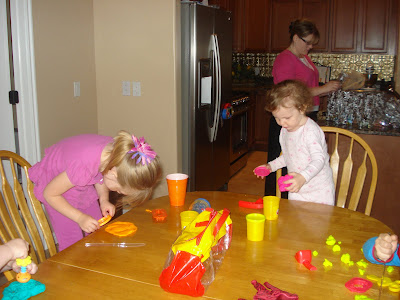 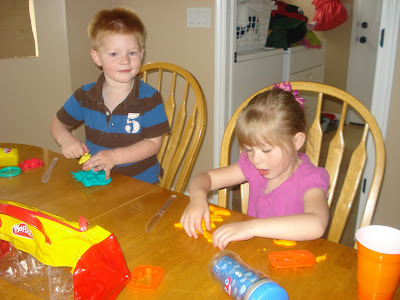 and Weston, who is Spiderman wherever he goes (thanks to Austin for letting him "borrow" that mask all weekend)! 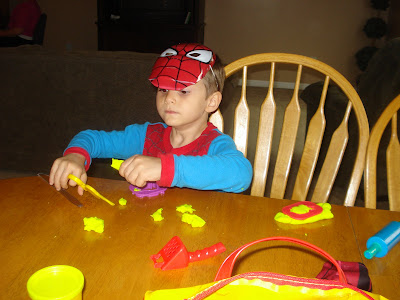 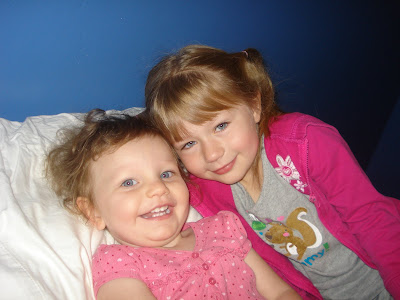 It was wonderful to see the Olsen kids... they are a joy to be around. Friday morning as we were getting ready for the day, Weston kept beckoning Hope to come play with him. Hope declined his invitation several times because she needed to "help" me do my hair! Cute. Weston did get plenty of attention from Emma and Hope though. I think he may have escaped with more than a few kisses from them (on his cheeks of course)! 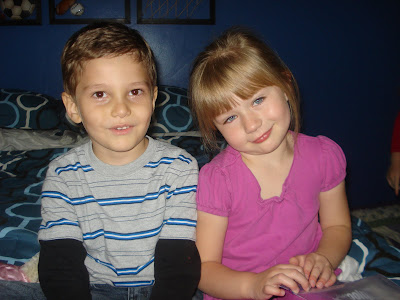 So Friday we arranged to meet Mike, Carrie, and Lily at Cabela's near Thanksgiving Point. If you do not know what Cabela's is, you are not alone. I had no idea! Turns out it is almost exactly like the Bass Pro Shop. It provided a huge indoor place to visit and some fun things for the kidlets to see too. We would have preferred to have gone somewhere out-doors, but it snowed on and off all day and was downright blustery... at the end of April!

It was wonderful to see my brother. I was just thrilled that we were able to get together. Sophie and Lily are only 3 months apart in age, so it was really fun to see them interact. We hadn't seen Mike and Carrie for 8 months (since September). I did my best to get some great pictures, but I was working with some antsy kids. :) Here's Lily, posing beautifully for the camera: 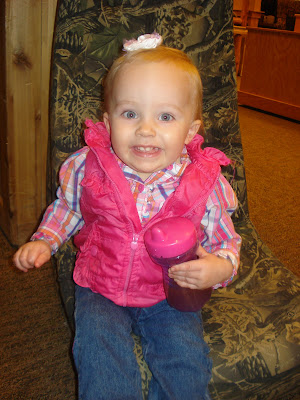 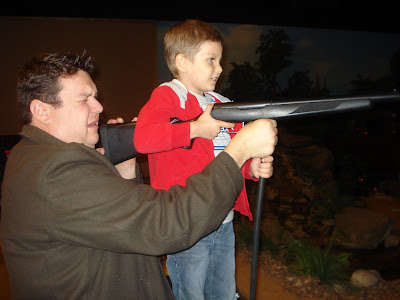 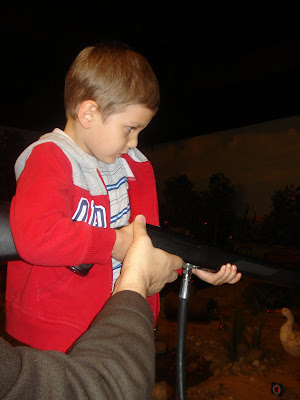 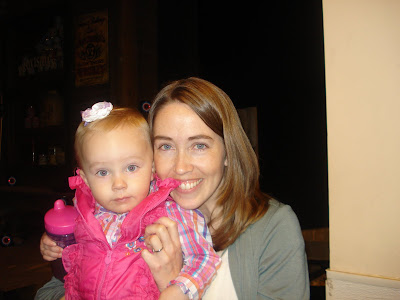 I had to get at least one picture with me in it - to prove that I was actually there! Sophie looks kind of angry in this shot...maybe because she was about to forever lose MY favorite hairbow! 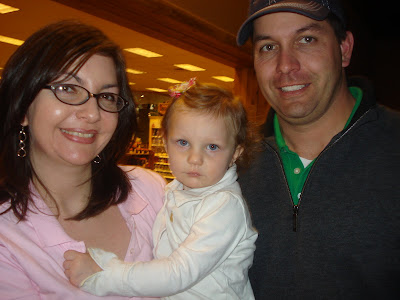 Observing the fish was one of the kids favorite things (they also liked feeding them). 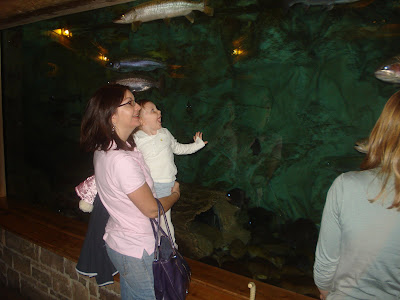 Sophie and Lily both had a little obsession with the stroller! They took turns pushing each other... 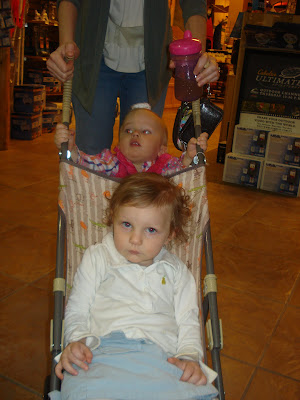 And sometimes they both pushed it together (thank you Carrie for guiding the stroller pushing activities)! 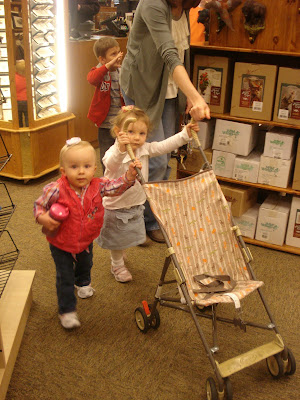 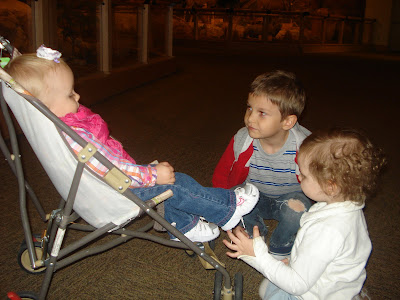 Weston finally got in for a free ride at the end! 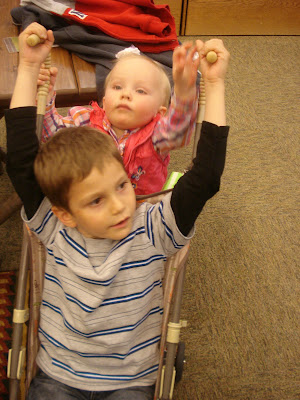 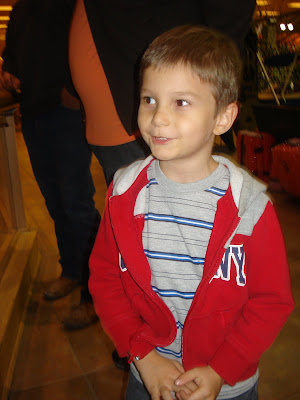 After exploring the whole store (including the fish tanks, animal displays, gun museum, and various other attractions), we finally went to their furniture section and sat down on a nice couch set to visit until the kids went bonkers...which didn't take too terribly long. 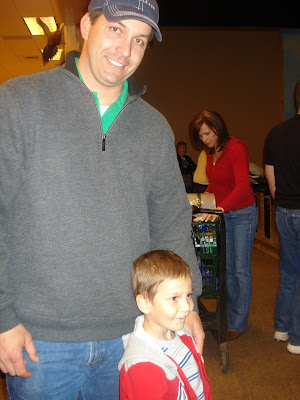 We also ate while we were there. While the company was superb, I probably wouln't recommend the food. :) 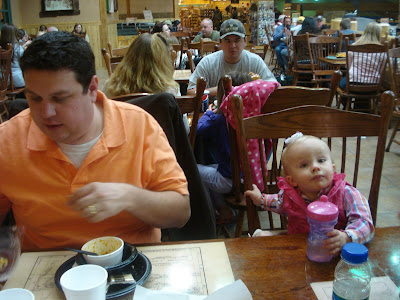 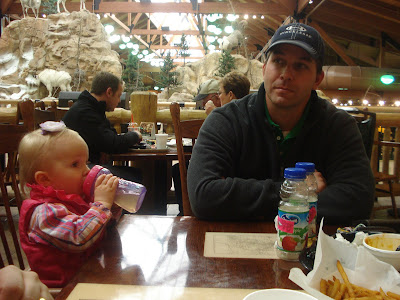 I look forward to these little girls getting to know each other better as they grow up! I'm so happy Weston and Sophie got to see their (one and only) cousin. I really wish we lived closer to Mike and Carrie, but I sure am happy we were able to get together last weekend!! 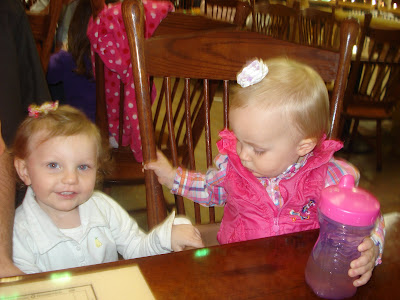 We have been to that Cabella's lots of times! And we like it a lot! But the last time we ate there, Lexi was a newborn. I don't remember if the food was good or not.

We always have fun with everything else, though!

Glad you had a good time seeing family and friends.

Can't believe you didn't know what Cabella's was! Such a great store! That exact Cabella's was actually where Steven first started showing a genuine interest in me, thus prompting me to cancel a date that I had that night, in order to hang out with him more... and obviously, you can see the rest of the story. :)

What a fun trip!! I bet it was soooo wonderful to see the Olsons!