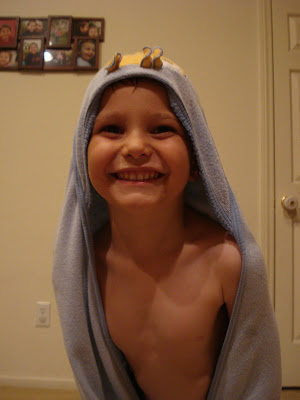 If you were to ask Weston what his favorite word is right now, it just might be "powerful." He describes many things as powerful, such as a baby lizard that is able to crawl under a rock without getting smashed, or his bones and muscles, the power of which truly impresses him on a regular basis!
The other night after getting out of the tub, I reached for the towel he used to use as a baby. I thought it would be fun for a change, and I love the little hoodie part. I told him that in that towel he kind of looked like a Pharaoh. Of course he wanted to know what a pharaoh is, so I said it was a powerful ruler. This was his response:

"You mean powerful like he can drink his apple juice straight, without any water in it!?"