I have to admit, there are a few things that make me absolutely insane...
For instance, when Weston's love of nudity gets out of control. He can now remove pretty much any article of clothing on his own, after which he pushes his diaper down until eventually he can step out of it. For some reason this trick has become an obsession. The first time was kind of funny, but after the sixth time in the same morning, it gets to be a little annoying. 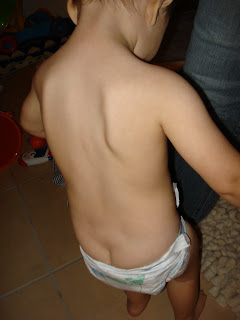 Once Weston discovers something that he likes, it is almost impossible to deter him from it. He never forgets, and he is not easily distracted. I think this tenacity will be a great asset later in life, but for now I could do without it!
Like when we went to Chuck E. Cheese recently. He was so obsessed with riding the same two little rides that when we pulled him away, he screamed like he was being stabbed! What awful parents we are - yanking him away from a ride he had already gone on like 60 times to go be tortured with pizza, cake, and a bunch of other little kids having fun! 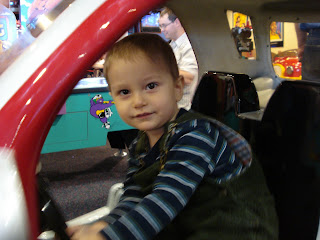 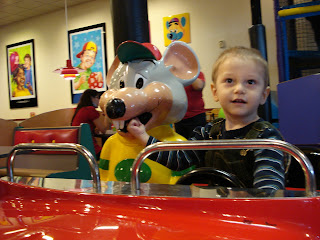 He also has some other obsessions, like vacuuming, which aren't so bad. 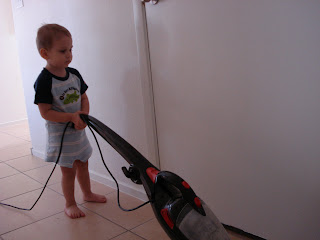 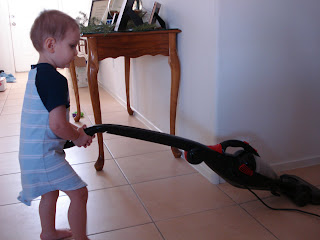 I know Weston is just testing his boundaries and acting like a typical 22 month old (I can't believe he is almost 2!!) BUT, I am truly tired of sounding like a broken record. Here are a few phrases that I never imagined would make up the bulk of my conversation in an afternoon:
*Boys who hit their mommies have to go to their room.
*Do not rub your dirty face on the couch again!
*Don't you dare even think about taking that diaper off again!
*Do not pee on me! Boys who do not use the "big boy pottie" must pee in their diaper!
*Only bad boys disobey their mommy.
*Do you want to go to the room?
*Okay, that's it, you're going to the room.
Alas, gone are the days of lecture halls, political debates, and frequent conversations of the intellectually stimulating variety. However, I must say that the joys do outweigh the frustrations.
Here are some things that bring me much happiness and satisfaction, especially as of late:
1. Reading with Weston. 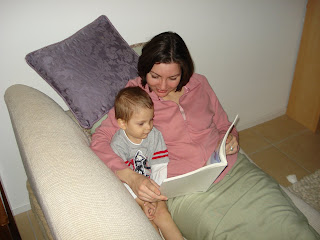 2. Playing the piano. This is the piano I learned to play on... my mom had it since before I was born, but recently bought a new one. Which means this beauty is now in our house! I play every day, even if it's only for a few minutes here and there. Amazingly, I can already tell that my skill is improving! 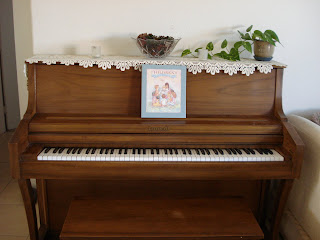 3. A husband who does lots of lovely things for our family - you know, like bring home the bacon, do the yard work, and make delicious veggie juice for us. (He adds fruit in too for sweetness) Doesn't this pitcher full of juice look beautiful? I thought so, that's why I took a picture of it! 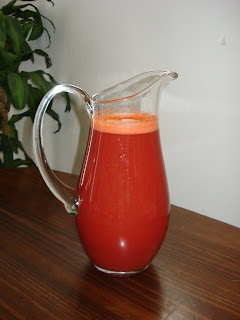 4. My sweet boy (yes, he is still sweet most of the time), who does this pose a lot. I think he really wants to do a somersault, but instead he usually just falls over. Doesn't he look a lot like a stink bug in that position? 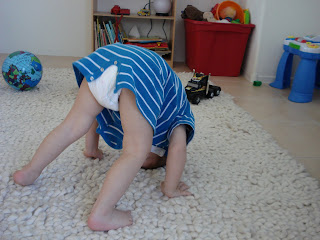 4. The many natural waterfalls Las Vegas has to offer: 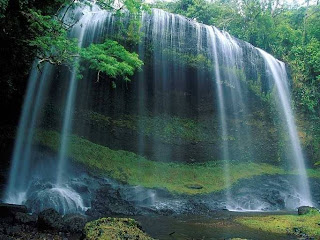 I know I'm lucky that right now my little girl just likes to put clothes on. I know soon enough that they will start to come off. (Maybe if I leave off the heater she'll be too cold to go sans clothes.)

I loved the post. Don't worry, you will eventually lose those mantra's and come up with new ones. Thomas never did do the diaper thing, but a friend of mine had to duck tape the diaper to her son so he would stop pulling it off.

Don't you love being a mother to a little boy! It truly is wonderful.

Little girl/little boy, they're both awesome in amazingly different ways.

Lexi still loves to be a nudist, but has learned to be less frequent in her streaking!

Kenny is also found of bear bottoms, but can't strip down yet, thank heavens!

Ha! I liked that waterfall gag. Sigh...motherhood. It is so darn fulfilling sometimes and some days it feels like it's all I can do to keep it together. Evan is obsessed with his "weiner". I'm not sure how he came to call it that...I guess we taught it somewhere along the way...but I am constantly saying, "GET YOUR HANDS OUT OF YOUR DIAPER!" To which he replies, "MOM! I FIXIN' MY WEINER!"

I miss college. I miss it so, so much!!! :) Come back, intelligent conversation! Where did you go?

You make me giggle Michelle! Your post is adorable, I love it. And, yes, that veggie juice does look beautiful.

Hi Michelle,
Thanks so much commenting on Elijahland!

And thanks so much for sharing your blog with me. I got a chance to look through it and have really enjoyed it. This post was funny. Weston seems to be quite the character. :)

Anyway, thanks for sharing. I'll make sure to check in on your family once in awhile so that I can get to know you better. And, thanks for reading. It means A LOT to me!
Lisa

sounds like you've been learning a bit of love and logic. boy do i need more! oh the JOYS :) i laughed when i saw the waterfall. ha ha!

Hey Michelle, are you kidding me, I would love it if you checked out my blog, but I get to link up to yours too, I am jealous you got a piano, I would love one, but Dave hates the sound of it playing, probably especially with me behind the keys, but I'm thinking just put it in the basement with sound proof walls, maybe that will be my goal this year to get one, I think our marriage can handle it

Haha. You are too funny, Michelle! I actually did a double-take with that waterfall pic, thinking, Where in Las Vegas is THAT?" :) Seriously, a very gorgeous picture! What a great post! I love when people truly tell it like it is. :)

We are in the middle of potty training. So my little girl goes around nude for most of the day.

I just wanted to say that I wrote about how much I love your blog on my blog. If you want to take a gander...

THe picture of you reading to Weston is adorable! Absolute favorite Michelley.