Our Day At The Park - A Sweet Reminder

Just yesterday I was thinking about what a big boy Weston has become. As a baby, he was the biggest mama's boy in the whole wide world. I remember once when he was about 12 months old I left him with Jason while I went to Enrichment. I had a wonderful time and was thrilled about it until I came home to an upset husband and an even more upset little guy! Weston had screamed and cried from the moment I left until the moment I arrived home.
Well, those days are long gone.
Yesterday I was thinking about how independent he has become, and feeling a little nostalgic for the little baby that used to be my whole world.
Since he is a social creature who desperately needs interaction with other kids (something he has been deprived of lately), I have decided to take him to the park as often as possible. Yesterday afternoon we arrived at the Rec Center, which is just adjacent to the park. I noticed a large group of older little kids (I'd say between the ages of 8 and 12). I noticed how they were all joking around, trying to be cool and obviously seeking the approval of each other. I thought about how they were probably starting to think they didn't need their parents so much, and probably didn't give them big sweet kisses at bed time any more.
I asked Weston if he wanted to hold my hand while we walked up to the swing set. He enthusiastically responded that he did. I thought how great it was that he still wanted to hold his mommy's hand. When we got up there, he let go and ran to climb up one of the platforms with slides. After going down a couple of times, a group of three older kids congregated on the platform. (By the way, why do older kids, obviously not interested in the play ground, just go there to "hang out?" I have never understood that!) Weston decided that he wanted to be part of the group, so he nonchalantly walked over to where they were, and just stood there. I guess he didn't feel awkward that they were all 6 to 8 years older than him! He just figured they were all buddies. I think it is so cute the way that he assumes everyone is his friend... a lovely reminder that he is still just a little guy.
Finally I spotted a little girl about the same age who had arrived and was playing in another part of the play ground. I nudged him in that direction, which worked immediately. The second he laid eyes on that cute little girl, he was following right behind her. And I mean quite literally that he was only one step behind her... for the next half an hour. And she loved it! At one point I saw him following her up the stairs. He is pretty tall and has no problem at all with the stairs, but she is shorter and kept tripping. Every time she tripped she would say, "ouch!" Next thing I know, Weston is pretending to have a hard time, and repeating "ouch!" over and over again! It was hilarious.
It is only a recent thing that he goes down the slides by himself. Before Sophie was born, he would want someone to actually go up onto the platform with him. Well, I figured he didn't need me much anymore, but I still usually wait for him at the bottom of each slide. Yesterday I noticed him looking for me, making sure I was watching him and cheering him on! It was adorable, and yet another welcome reminder of his tender age.
When it was time to go, Weston gleefully grabbed my hand. And as we again walked past the too-cool older kid crowd, I gave silent thanks for my sweet toddler whose greatest delights are playing at the park with his mom near by and making his baby sister laugh. 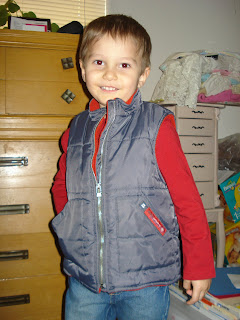 Don't you love days like that? They are the gifts of motherhood.

i love that you recorded this! how sweet. :) he reminds me of justin in some ways. ;0)