Weston's preschool at Duncan has a bunch of rules that I wasn't used to, because they didn't exist in his preschool last year (at Tartan). At the beginning of the year I asked Mrs. Solem about possibly visiting or helping out in the class sometime, to which she responded that she would have to look into it because they are supposed to have some kind of special forms for that, yada, yada, yada. Apparently parents haven't even been let in the classroom to bring treats on their kid's birthday! At our parent/teacher conference before Christmas break I brought it up again, and this time (obviously exasperated by all the red tape) Mrs. Solem said that she has tried for months to get permission the proper way, and that she was just going to start allowing it. So, Sophie and I got to spend the entire two and a half hours of preschool with Weston's class today! It was so much fun, and both kids were rather excited this morning (as you can imagine)! 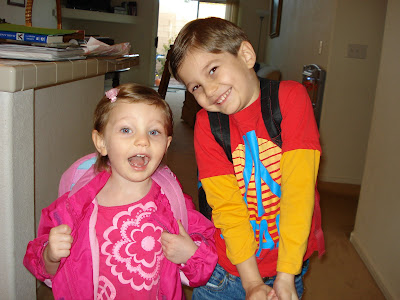 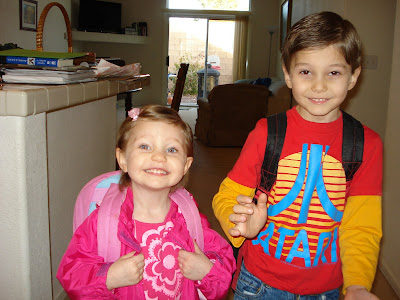 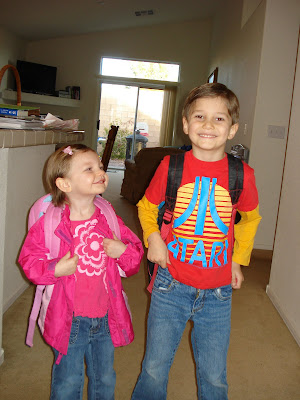 Sophie had a blast... and even though she is only 2, she fit right in with the other kids! She got to sit next to Weston during circle time, and he was so sweet to her. I would have loved to snap some shots there at school, but I guess that would have been a *little* distracting to the other students (understatement)! Here is a video of the two of them before we left in the morning:


As we were driving home I asked Weston the usual question, "how was school!?" He told me that it was good, but he just wishes that I could have stayed with him in his class today (he often says he wishes that I could be one of his teachers in his class). Then he burst out into laughter! Silly boy. I'm just glad he is still young enough to want his mom around! :)
Posted by Michelle at 12:59 PM

oh, I love that first picture!!! they are soooo happy!!!!!
p.s. it is sooo weird that parents have to get clearance to get into the class room. that's nuts.

I can't believe that Sophie wants to go to school already! She's growing up so fast!