This post is a little random, but I've decided that I have missed too many ordinary moments. So here are a few!
Dec. 23rd:
Weston: "I wish all bad guys have to eat something spicy that burn their mouth and make their tongue yellow forever!"
Dec. 25th:
Weston: "I am a grumpy old fish!" It should be noted that this comment did not emerge from any conversation relating to fish whatsoever, or grumpiness for that matter! He was also running around like a kid in a candy store with glee after opening all of his presents...
Dec. 26th:
As we are discussing where to put the awesome US map I got for Christmas, conversation turns to what the United States is and why we love it. Again using the opportunity to teach Weston how blessed we are and how we have a responsibility to protect freedom, the conversation then turns to the "bad guys" that don't want us to be free. I assured Weston (again!) that we don't want to hurt or kill theses "bad guys," but that we just wanted them to lose their power.
Weston had a few inventive suggestions for how this might be accomplished which I found amusing:
1. Put them in a refrigerator so they get really cold and can't move. Then they'll lose their power for sure!
2. "Steam" them in the oven... this one got vetoed already, mostly because ovens aren't for steaming (lol)!!
3. Make them put something really gross in their mouths like LEAVES!
Kid logic is the best.
December 29th:
Today, while praying over lunch:
Sophie: "Heavenly Father, I bless all the people I like!" I guess she got tired of naming them all every time she prays. I had to hide a chuckle...
1/2/12
Today Weston called Sophie Mr. Bumpley. Where does he come up with this stuff?
Sophie tells me she is doing "ka-kratie" and sometimes "p-platies!" She really gets into it. It usually involves an initial pose, followed by a spin, and then a giddy collapse. 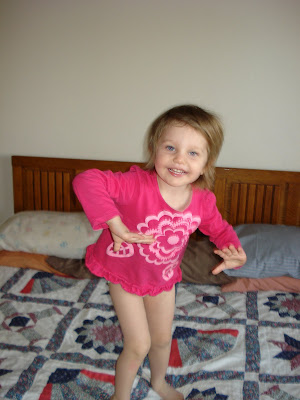 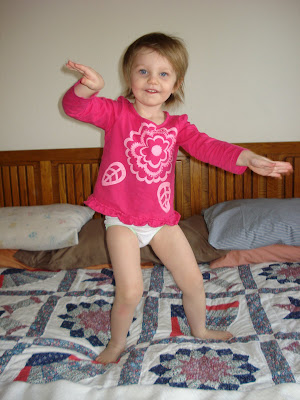 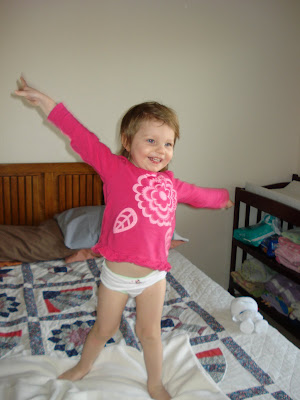 One of Weston's favorite silly activities is putting things on his head... like every night when he takes his shirt off to hop in the bath, he just leaves it on his head for a few minutes and then runs around like a tornado until I force him to actually get in the bath! Here he is doing the same thing with jeans... 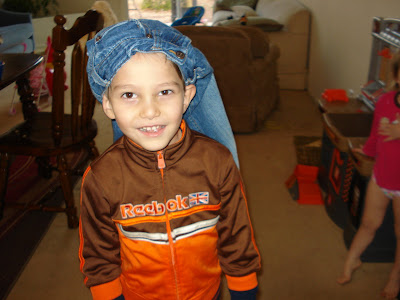 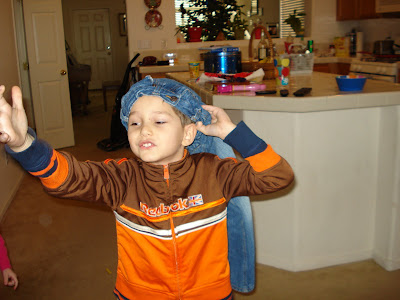 So, at the YMCA where I work out they have one of those buttons you can push to open the doors automatically. Sophie LOVES pushing the button and watching the doors open, but she knows that she'll get in trouble if she does it just to do it. Fortunately for her, the last couple of days there have been people entering the building right as we are leaving. After pushing the button and opening the doors, Sophie exclaims (to the people entering the building), "there ya go!" She just sounds so darn grown-up! I was looking at some of the pictures I took during the month of December and was rather taken aback when I realized also just how grown up she is looking these days: 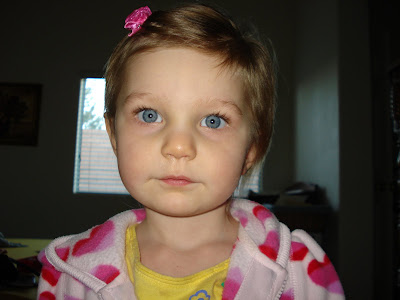 Whenever I get anywhere near Weston with the camera he quickly forces a frown (to be silly). Here is one of his ridiculous frowns, followed by a moment where I caught him in laughter! 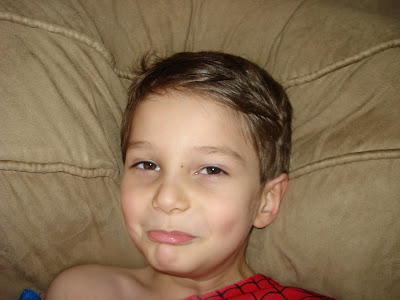 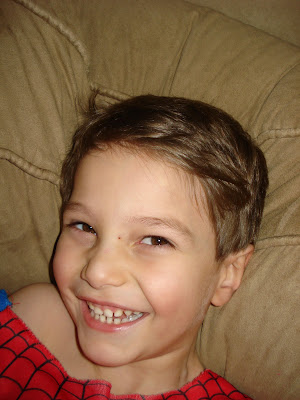 I love that my days are filled with these two adorable, smart, loving kiddos. When I was younger I remember wondering if I would feel unfulfilled being a stay-at-home mom. I had so many ambitions and dreams (and still do), and I didn't know how I would feel. I even wondered if I would get bored. Instead, my life has been filled in new and amazing ways that I never could have fathomed before! To me, there is no greater evidence of the love that God has for his children than the gift he gives us in allowing us to be parents. One of the very greatest blessings in my life is getting to stay home with my children... it is a gift that I cherish more than almost anything in the world. There is no place I would rather be!!
Posted by Michelle at 4:49 PM

I loved this sweet post of random chdren silliness and cuteness. Kid logic is the best. :) I, too, feel very fulfilled as a SAHM. I have my not so good moments and of course it isn't all fun and games of course, but there is nothing else I would rather do. I know that I am where I am supposed to be right now. :)

Ditto! I am NEVER bored. It is actually when my kids are gone that I am. ;) Your kids ALWAYS are saying fun stuff. It's so cool that you write it down!