Weston has a fascination and love for all things with wheels - especially cars and trucks. So whenever Grandma allows him to "drive," he is pretty much on top of the world. ("Driving" entails sitting in the drivers seat while the car is parked in the garage, pushing buttons and playing with the steering wheel.)
The other day I went to snap a few shots of this favorite past-time: 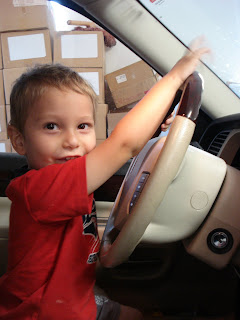 Backing up, carefully of course: 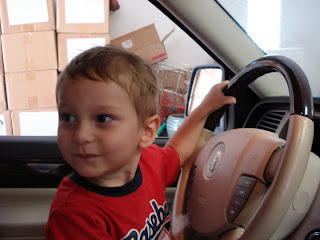 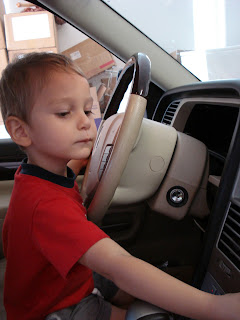 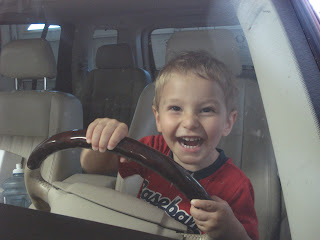 Then, later that day, I heard a blood-curdling scream. I had just stepped out of the bathroom (where Weston was taking a bath) for a micro-second to grab a towel. Alarmed, I rushed to the edge of the bath to see what was causing such intense distress: 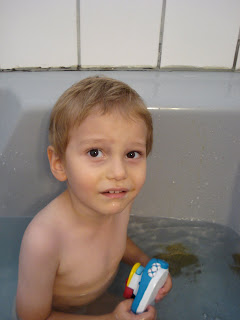 Sometimes pincher bugs get in the bath, so I thought maybe he had been pinched. Nope, no pincher bugs in sight. What could it be? He had inched himself over to one little corner of the bath where he was leaning away from something that had to be absolutely horrifying.
Of course! I finally discovered the culprit: 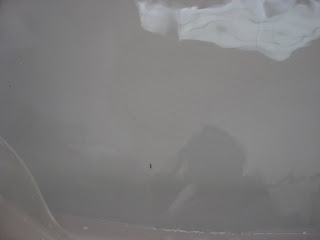 What do you mean you don't see anything? There, above, is a little black dot. An ant to be exact. Yes, my son screamed like a girl on fire over an ant.
At least he still likes to wrestle, smash things, and flirt with all the little girls in nursery. Otherwise I might be a little worried!
(Not really)
Posted by Michelle at 7:07 AM

His expressions are priceless! :)

Your letter to summer was soooo appropriate! I hope she listens. :0)

I just love your insight into Weston....a manly man with a sensitive side. :)

Oh, my gosh--funniest post I've read all day. All WEEK, in fact! Weston, you are the cutest!!!

Lexi freaks out over bugs too. But she doesn't mind picking up worms. I think she learned the bug fear from me. I try not to show it in front of her too much (because she then thinks that there really IS something to be afraid of!), but it is hard when a big, hideous spindly bug is crawling on your leg!!!

Kenny loves to play in the car too!

I am so glad my son isn't the only one who SCREAMS at harmless bugs. Thomas is afraid of flys.

I really wonder what goes through their little heads!

So funny! He is too cute. I think they never grow out of the screams. A few weeks ago while we were riding the horses, all of a sudden Chris screamed like a little girl, but it was a snake...I would have screamed like a girl too:)

Such a great post! Sooo funny! Hope you guys have a wonderful 4th of July!

I saw the bug! I did! That's okay, Weston - I've seen strapping boys (one of whom would later become a firefighter) stand on tiptoe and screech at a garter snake. Granted, I was doing it too, but they're boys.