Imagine taking a large mirror, and throwing it from the roof of your house. Think of the sound created by that mirror as it hits your driveway, shattering into a million pieces.
Now, add a few fingernails scratching a chalk board.
Add a very LOUD clap of symbols to the mix, and turn up the volume on all three.
That is pretty much the sound that Weston's new toy sword makes. Who, you ask, would purchase such an offensive toy?
A man - of course!
Jason got it at the San Gennaro Feast, an Italian Festival that is really just an overpriced carnival with overpriced Italian Food. He was there selling sparklers, poppers, and other such novelty items.
On the last night of the Festival Jason returned home sometime around 1:00 AM. He was SO excited to show me the cool toy that he had for Weston - he just had to get it out and demonstrate right then and there (I was half asleep, mind you).
I almost had a heart attack when I heard the noise it made! I wasn't just worried that it had awakened one (or both) of the kids, but that they were terrified - or worse yet, deaf!
Now, in defence of my husband, I have to say that he had no idea how loud it really was since he got it at a carnival.
Fortunately, Weston LOVES the sword, so it keeps him occupied for long periods of time... 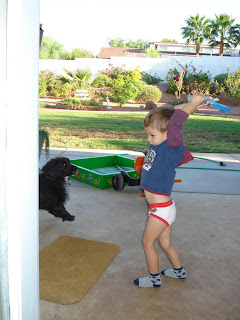 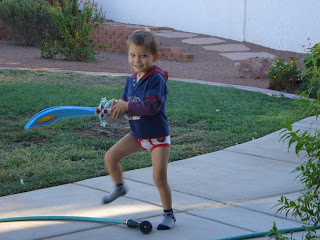 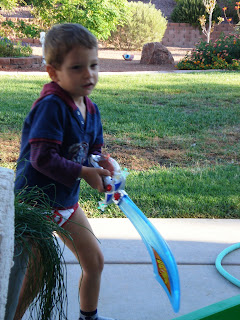 It was difficult to get any clear pictures since I couldn't get Weston to pose for me... he was too busy chasing the dog around the back yard with that silly, deafening, plastic sword! The poor dog has nightmares, I'm sure.
Posted by Michelle at 2:58 PM

That is SOOO Funny. I use to buy little kids those kinds of toys...until I had my own. Someone bought Thomas a pretend nail gun and it is so obnoxious! I wish they had kids so we could return the favor!

My brother had a "war gun" that was a terribly noisy toy. I still remember perfectly the horrid sounds it emitted. Thankfully Lexi and Kenny don't have any toys like the sword or war gun!