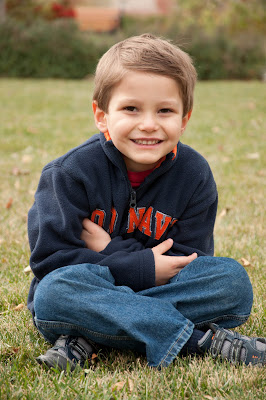 I can't get over how truly amazing it is that Weston is talking so much. He began pre-school six months ago. It started off with a new word here, and a new word there. Pretty soon it was a steady stream of new words. After awhile, he had the confidence to try anything! Now, he consistently repeats the things he hears us say (for better or for worse). For the last three weeks, he has been reading a verse of scripture out loud every day!! We read a phrase, then he repeats. Sometimes he can only handle repeating one word at a time, but when I think of where he was just six short months ago at age 3.5, I can hardly believe it! He also prays at least once a day.
There are a few words that Weston still says his own way. Kind of like how he used to call Sophie "puppy" until he learned how to say "Sosie," and then eventually "Sosie" morphed into Sophie. Anyway, here are a few of Weston's words:
lope = yogurt
sirmut = syrup
vepables = vegetables
no-neets = noodles
Language development is not the only thing that's changed. Weston has grown so tall! He is taller than all the 5 year olds at school with him. I've had the chance to visit his preschool a few times now, and I've seen how he interacts with the other kids and with his teachers... he is so much like me! (Well, you know, except for wrestling with the other boys during outside play time.) He is an obedient student, a social creature, and somewhat of a people pleaser. Whenever he sees Sophie and me coming to visit his class, he gets all excited to include her in playing with all his friends.
Weston loves his little sister. Whenever she gets hurt, he kisses her face (always reporting to me exactly how many kisses he gave her... counting is one of his newest skills, after all). He'll comfort her by saying, "Okay Sophie? It's okay, Sophie!!" Weston doesn't just say things, though. He repeats them over and over and over again. He is extremely tenacious. He never gives up on what he wants, and he will e n d l e s s l y insist on something until he gets it. I'm not talking about the ordinary thing that all kids do where they just whine about something because they know you'll eventually give in if they just wear you down (although he has been known to try that, too). If he goes to sleep wanting something - assuming it is something we won't let him have - he will most likely fall asleep crying for it. But that is not the end! Whenever he wakes up, the first thing he'll do is start asking for that thing AGAIN! No matter how much you try to distract him or divert his attention to something else, he will absolutely NOT forget the thing he really wanted.
One day this past Fall, I thought it would be fun to look at some old pictures and watch some videos from when Weston was a baby. He loved this, but when he saw pictures from our trip to Disney world with Grandma, he became upset. He was upset because he saw himself wearing the Mickey shirt Grandma had given him, and he realized he didn't have it anymore (he had long since grown out of it). He began to cry, repeating over and over again that he wanted the Mickey shirt Grandma gave him! I wasn't sure if he was attached to the shirt because of his sheer, unadulterated love for Mickey Mouse (that really doesn't sound right), or because Grandma had given it to him. All I know is that I could NOT console the kid! He cried for at least an hour before the bus came, and he was crying so hard at that point that I had to carry him onto the bus and set him in his seat. When he came home from school three hours later, he walked in the house an immediately began crying about his shirt again! Needless to say, I found him a great Mickey shirt for Christmas... which he is equally attached to, I might add. 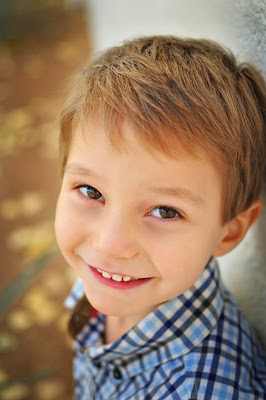 Not only is Weston extremely sentimental, but he has the memory of an elephant (okay so I got curious while I was writing this and just had to know if elephants really have the best memories of all the animals, and according to chacha.com, not that anyone has ever heard of them, either chimps or sea lions take the cake). In the people kingdom, I think Weston wins the prize. Of course, he has only now barely lived 4 years, so that remains to be seen! Let me share a story to illustrate my point. Yesterday we were going through his closet and sorting out his shirts. I looked at one cute orange shirt and said, "buddy, this is so cute, and I don't think you've ever even worn it!" He immediately recalled the one time he did in fact wear the shirt - several months ago while watching Back to the Future. He remembers details like that all the time.

When he was about three and a half (sometime in August), my mom came over to visit and asked me how the 24th went. She was referring to the 24th of July, meaning Pioneer Days... our Stake has a HUGE (and super fun I might add) celebration that weekend each year. We generally refer to it as Pioneer Days. We don't talk about it in terms of the date, so when she asked how the 24th went, I would have never guessed that Weston had any idea to what she was referring. And yet, to my utter surprise, he started telling her about the fireworks and how they hurt his ears! I'm sure at some point he heard someone say it was the 24th that day, and he just remembers things!
So last week Weston turned four. I was emotional that day, because it was also my mom-iversary! I thought about how his arrival into this world and our life was the best thing that ever had happened to me. I thought about the intense anticipation we all felt the day he was born. I also thought about how glad I was not to be reliving that day! When I think about all the life-altering moments in my life, Weston's birth tops them all. Of course my life changed dramatically for the good when Sophie was born too, but nothing in this world compares to becoming a mom for the first time. I don't think I really knew what love was until I had that tiny, adorable little boy in my arms! He had the most piercing, beautiful eyes, and large hands! He was long and skinny, but he quickly filled out. Now he is tall and thin again! He is tender and sweet like me, but he also has quite a sense of humor, which he clearly got from Jason. It is just so exciting to watch his personality emerge more and more as time marches forward. I am so proud of my little Weston!!
By the way, if you are still reading this post and you aren't family, you must be an extremely devoted friend! I will post the pictures of his birthday and birthday party, but for now I just wanted to record my thoughts on my little Bean, who is not so little anymore! We do still call him Bean sometimes, so just the other day I asked him whether he was a black bean, a pinto bean, a white navy bean, or a green bean (I didn't even give the option of being a kidney bean or a lima bean because they are just too gross). He responded that he was, in fact, a BLUE bean! I thought about that for a minute and then asked if he was a blue JELLY bean, which of course was what he meant. You've got to love that kid!! 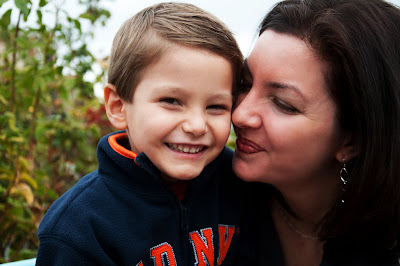 I can't believe you have a 4 yr old child. Just crazy!

I think it is so wonderful how fast he has picked up on speaking and learning new words. Soon enough you are going to have posts filled with funny Weston quotes!

Hope he had a wonderful birthday filled with lots of Spider Man! :)