Some firsts are better than others. Last year, when Weston was 3, because of a speech delay, he qualified for the school district's awesome pre-school program. I was so nervous to send my little "baby" off into the big wide world of public school, but the instant I met his teacher my fears melted away. Mrs. Shelly is the single most awesome teacher in the whole universe! Seriously, I think she has super powers. She is one of those people that just oozes warmth and goodness... and I knew she loved my Weston. She genuinely loved each of the kids in her class, seemingly from the moment she met them! She had a system for everything, and always seemed to know the right thing to do.

Jason and I thought Weston would cry his first day of school but he didn't. He loved it from day one which was something of a small miracle! The whole year was incredible. Weston learned to talk, made great friends, and thrived with his awesome teachers.

The last day of school after saying good-bye to everyone, I came home and opened Weston's Spider Man backpack. To my shock there was a letter from Mrs. Shelly saying that she was taking a different position in the school district and wouldn't be returning to run the preschool program at Tartan Elementary. I was overcome with a wave of intense sadness! I had just assumed Weston would be fortunate enough to be with Mrs. Shelly another year... and that I would be lucky enough to volunteer in her class, which was run so perfectly! I thought about Mrs. Shelly a lot this last Summer and how much we were going to miss her.

Then, another unexpected thing happened. Sometime at the end of July or beginning of August we received a letter saying that Weston had been reassigned to a different school - Duncan Elementary. Duncan has only been open for a year, and this is its first year with the preschool. It is supposed to be a great school, and is only 10 minutes down the road... but when you compare that with Tartan, which is only a couple of blocks away, the change seemed a little ridiculous!

We had the opportunity to meet Weston's teacher before school started, and she was (is) really nice. Jason says she looks like she's 10 years old. To be fair, she looks closer to 20. The classroom wasn't decorated yet, and there was barely anything in the room at all when I took Weston to our "meet the teacher" deal... and no refreshments! I don't particularly care about the food, but when we went to the school, we just weren't feeling the love. Everything was cold and awkward. I was pretty sad about the whole thing, but trying to keep a positive attitude for Weston.

The first day of school was MADNESS. There was no parking on any street going in any direction around the school. Jason and I literally spent 20 minutes looking for ONE spot to open up. So even though we went with plenty of time to spare, we ended up being late after hiking up to the school from our parking spot, which left no time for first day of school pictures in front of the school! I was bummed. That entire day I found myself constantly comparing everything less desirable about this new preschool to everything that was so great about the last one. It's a long list, trust me!

It was then that I realized how good for him this experience was going to be. Life is ever changing! You can't spend your life longing for the "good old days!" I figure now is as good a time is any for Weston to learn that awkward and unsettled beginnings can sometimes turn into the best experiences of our lives! To be honest, this situation reminds me a lot of how I felt when our ward was first formed a little over a year ago. There wasn't a sense of cohesion at all those first weeks. Most people felt torn about leaving their old wards that they had come from and just didn't know where they fit in. Looking back, I am astounded at how far we have come! I don't know a soul that would go back to their old ward now, because we have truly become a ward family.

I look forward to seeing what this school year will bring. Weston will undoubtedly make new friends and love his new teacher as he gets to know her. Not everything is magic at the beginning... but that doesn't mean it won't turn into something wonderful with a little bit of time and effort!

Weston got to eat anything he wanted for breakfast on the first day of school. What did he choose? A turkey sandwhich and chips. Here he is pretending to have a grumpy face, but he loved it (along with all the extra special attention)! 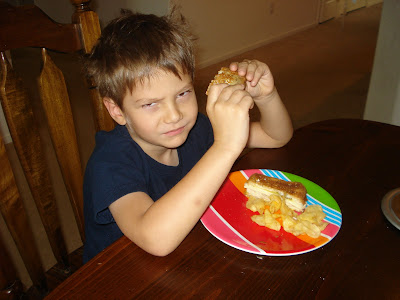 I tried to take a nice, smiley picture of him before leaving for school, but he did his goofy, over dramatic "I'm smiling so big that I throw my head back in glee" grin. So here is a nice picture of Weston's neck! For the record, his back pack this year is Iron Man. 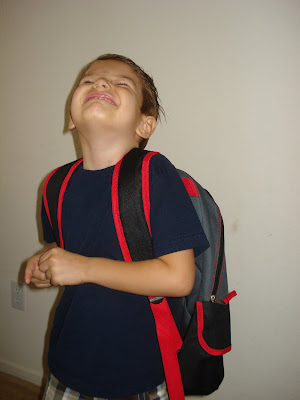 We are having a rough transition too. I am not liking having Lexi away for SEVEN hours a day at such a young age! Why, oh why, don't they have half day kindergarten here?

Anyway, Weston looks more like he is snarling and angry than gleeful and happy in the last picture. lol :)