Last weekend, two great things happened. Well, two good things and one annoying thing. The annoying thing is that bright and early Saturday morning I had to go to a boy scout new leader training meaning. The man conducting the training was so knowledgeable and nice and so very earnest about his position as scout leader trainer, but dryer than... um...er... something really, really dry. (the right word is eluding me at the moment) I don't know if everyone else was as bored out of their skulls as I was, but I honestly had to draw pictures the entire time just to stay awake.
Fortunately, as soon as I left, we all hopped in the car and headed to Boulder City to visit Jason's Grandpa and Grandma Glass. That was the good thing that happened. We had a blast! The other good thing is that for the first time since March, it was cool enough to wear a long sleeved shirt!!!! Hallelujah! I do not have words to express the sheer joy I feel at the coming of Fall. There are few things more glorious to me, and more "joyous to the soul" than the END OF SUMMER. I never felt that way as a kid, but then again, when I was a kid my summers were spent swimming, biking, and generally having the time of my life in a part of the country that did not leave me feeling like I lived in an oven for four straight months. But, I digress. Here are some of the cute pictures we took while visiting Grandpa and Grandma Glass: 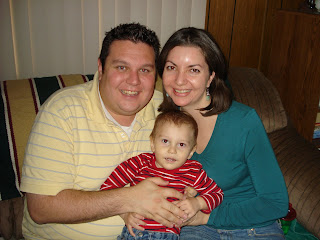 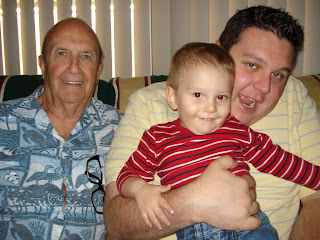 I tried SO many times to get a cute picture of Weston with his Great-Grandpa, but sadly had little success. I managed to get them in the same picture a couple of times, but no camera magic this time. 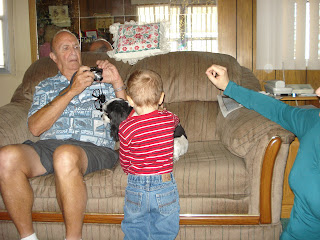 I did, however, get some great pictures of Grandma Glass with the munchkin. Weston had a great time dancing with her in the kitchen, 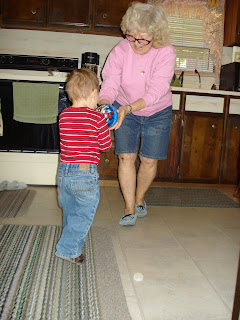 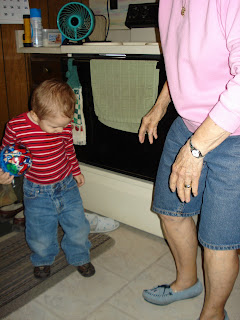 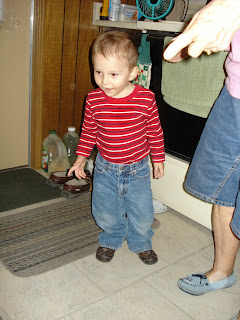 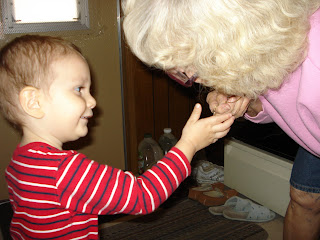 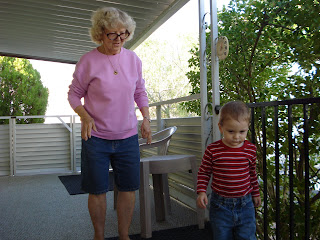 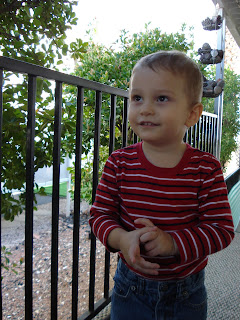 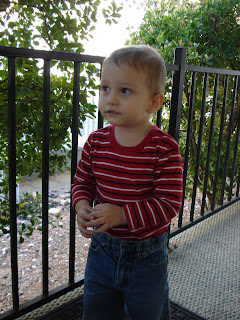 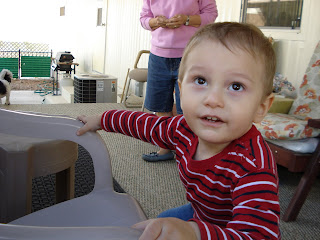 And trying out some cool new sippy cups that Great-Grandma had for him. 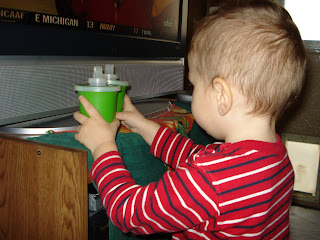 One had water in it and the other had apple juice. He walked around alternating back and forth between the two sippies. He would take a drink from one, then a drink from the other. It was super cute! 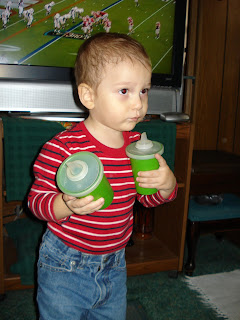 Weston thoroughly enjoyed Missy too. Unfortunatly, this is the only picture I have of them "playing" 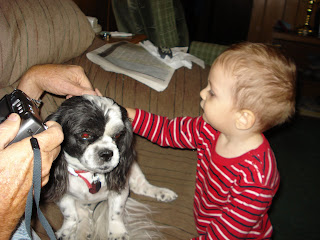 This is Jason with his grandpa 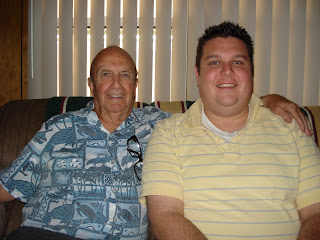 Weston was so pooped from all the fun activity that when we finally left at 4:00, he fell asleep in his carseat almost instantly.
Then he did something that he has never before done. He stayed asleep from four in the afternoon until the next morning!! The poor little guy must have been exhausted. It was a great day.
Posted by Michelle at 10:07 PM

Your little guy is seriously SO cute! We REALLY need to get together sometime. I'm having a party on thursday night, and it would be SOOOOO fun if you could come. I would love, love, love to see you. Check my blog for the details!
Luv ur guts

Hey Michelle, long long time ago we hung together in Jersey....It is fun to find you on here and see your sweet family, so much fun to have a little boy I bet! Just wanted to leave a little message, reading this is one of the most fun things about blogging I think we are at michelleanddavemcpherson.blogspot.com

You crack me up..."dryer than something really dry" HA!

Those sippy cups looked old school! Like Tupperware from the 70's from my childhood old school. Dig it.

I too cannot wait for the weather to cool down. I compulsively check the 10 day forecast every single day praying it will say something besides 80 something degrees. Today I discovered a look ahead one month feature so I was able to see the temps creep down to the 60's in November! Wo-hoo!