Yesterday was Weston's first day wearing jeans - ever. I know it doesn't sound like a big deal, but to him it was. As soon as I put them on, it's like he realized there was something special about them. Maybe he noticed that they look like what mommy and daddy wear. I don't know! All I know is that as soon as I put them on, he started dancing around the house, laughing all the while. Usually he isn't a fan of wearing clothes, so I just had to take a couple of pictures: 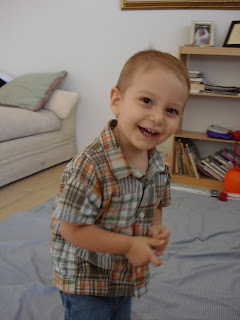 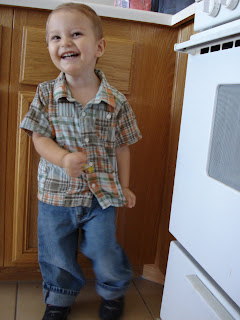 The other first was eating avacado. Again, probably not a big deal to anyone besides me. I have been trying to get him to eat avacados since he was 7 months old. He's not a big fan of veggies, so I was thrilled that he ate some avacado! (even though it is technically a fruit) I think the key was putting salt on it. GO FIGURE! (Why didn't I think of that sooner?) If you look closely enough at the above pictures, I think you might even be able to see a little avacado on the corner of his mouth. (but who's looking?)

The third first was for me. Yesterday was my first time being on the radio. I honestly don't know what I think of it. As soon as the interview was over, I called my mom to see what she thought. But she hadn't been able to listen. Neither had my husband, dad, brother, sister-in-law, or anyone else in my family! So even though they will be able to listen later (which of course they will all do if they want Christmas presents this year - ha ha ha), I still don't have any feedback about how it went. If nothing else it was a good experience, and hopefully something positive will come of it!

There is nothing cuter than a little boy in a pair of jeans. Don't you love it!

he looks so big in those! i'm also glad he ate avocado!
sorry i didn't listen either...tell me where i can hear the recording!

Nobody heard your interview! Gasp! Boot to the butt for close family members.

What did you do on the radio?! That is very cool, Michelle! :)

he looks so cute in jeans!

none of my kids will eat avocado's. which makes this mama very, very sad.

will it be rebroadcast? how do you feel about your time on air?