I have only half heartedly attempted to potty-train Weston so far... I really don't think he's ready yet, but he does have some interest. So, a couple of times a day we sit on the potty, particularly when I think he might be about to do his business.
Usually, he doesn't have the patience to sit there long enough to actually go. That is, until yesterday. I gave him a magazine to look at, in an attempt to keep him sitting there for a few extra minutes... and it worked! The only problem was, he didn't want to get off the toilet. I love this first picture, because of the intent look on his face, as though he were actually reading! 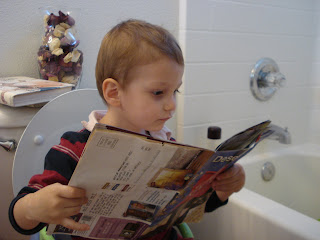 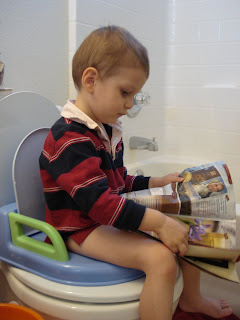 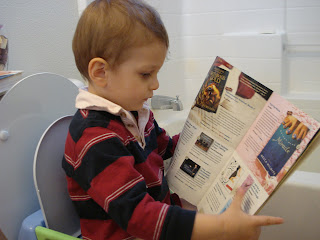 That first picture is the best one...EVER! What a cute kid. Good luck the the potty training.

Potty training....ugh. To quote Charles Dickens, "It is the best of times and it is the worst of times.."
The fact that your little man will even sit on the seat is something to celebrate. (maybe with a wheat-free cupcake.) Good luck.

Yes, ther first picture is golden, and exactly what I expected to see when I read your title! Cute.

That is too adorable! Little man on the potty with his magazine.

good luck with that. we can do it together! :) sooooo cute!