A lot of stray animals have gravitated to my mom's house over the last 12 or so years since she has lived in Las Vegas. The only ones that have stayed permanently are two dogs that live in the back yard, and the white cat in the front. We tried naming him several times, but no name would ever stick. Nothing sounded just right, so to this day we still call him "white cat" or of course, "kitty," which is slightly more endearing.
And even though the white cat proved to be a disturber rather than a friend to the indoor cat, Cleo, we never had the heart to get rid of him because he showed up about the same time that Jason did.
I had just graduated from BYU and had temporarily moved home. My husband-to-be started coming around shortly thereafter, and since he turned out to be such a great thing, it just seemed like bad form to get rid of the cat whose random arrival seemed to mystically coinside with that of Jason's.
Three and a half years later, Weston seems to have a pretty good friendship with the white cat. In fact, he is the only cat that doesn't run away in a mad fury when approached by Weston. I think it's kind of sweet! 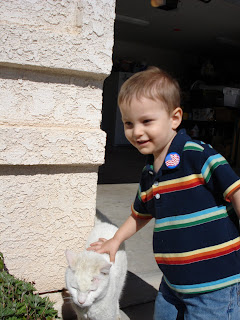 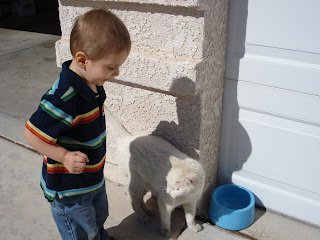 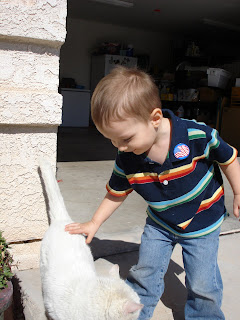 "White Cat" looks like a sweetie, and how charming that he popped into your life the same time Jason did.

I would love for you and Weston to come over and play in the grass anytime. It never dawned on me that you wouldn't have grass in Las Vegas. You'll have to come visit! :)

Homeless kitties are ALWAYS the best!!! And I agree with you--I feel the best about motherhood when I'm learning something or reading something or working on some new goal. And no, being showered and dressed before noon is NOT a good goal to work on--because it's almost always impossible! "Liberal Fascism" is an excellent book, by the way--I bought it for Karl, and have even read a bit when he not using it. Very well-written and VERY MUCH NEEDED today!

My sister has a random white cat that showed up as well. We named her an original name..."Snowball". Isn't every white cat on the earth named that? It's quite the scroungy cat...but so loveable.

i like that cat...i'm glad he likes weston. my kind of pet. you get the pleasure of having one without the pain. :)