We will wonder no longer...

Today was the all important 18 week ultrasound in the which I am assured that my baby's vital organs and body parts are all forming correctly...and when, of course, I am able to determine the gender of my developing baby. But as everyone knows, the baby must cooperate and be in the right position for any body parts between the legs (or lack thereof) to be visible. So, were we successful in determining the sex? The following conversation sums up the answer to that question nicely:
Me: "Weston, do you want to see the ultrasound pictures of the baby that I got from the doctor's office today?"
Weston: "No thanks, mom. I already know what a penis looks like."
After making this comment, Weston proceeded to explain (in some detail, I might add) just exactly what a penis looks like. Thanks for the anatomy lesson, dude!! I also found it rather hilarious that he thought the only picture I had was of the baby's "privates." What kind of a perv does my 5 year old think I am!? Fortunately, he is still ever so innocent... and I did eventually interest him in viewing the pictures of his little brother-to-be.
Here is the view of his, um, manhood: 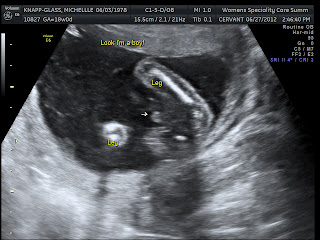 And a pretty nice straight-on face shot where you can clearly make out one of the eyeballs: 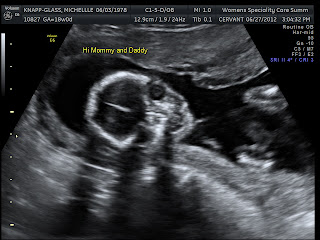 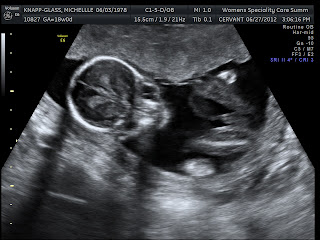 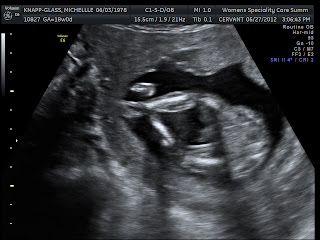 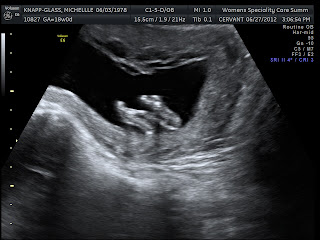 Here you can see the top of the baby's head along with his hands and feet.  The hand on the bottom is clenched into a fist. 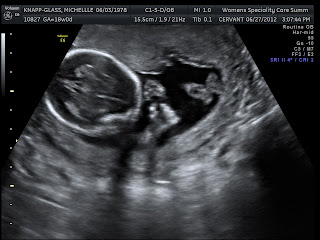 This was the least blury profile pic: 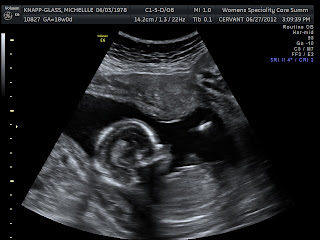 I'm going to interpret this last one as the baby telling me he's number one, although it also looks a bit like he's pretending to shoot a gun (like little boys do).
When we had the mid-pregnancy ultrasound with Weston, it looked like he was pointing at us with both of his index fingers, kind of like, "hey mom and dad, I'll be out soon!"  In fact, what looked like index fingers to us were actually middle fingers... as soon as that reality sunk in, my first thought was, "oh no, he is already just like Jason!" 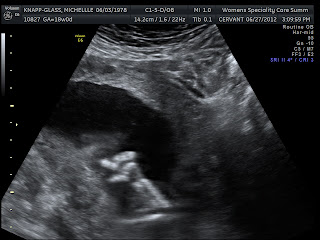 We are super excited about our son-to-be, and look forward to discussing arguing over a name for the next several months!
Posted by Michelle at 10:47 PM

Holy cow, those are some good pictures! I especially like the "legs and feet" one. :)

We are so excited to meet our new little member of our family.

I love Weston's reaction! That was tooooo funny. Congratulations on your soon-to-arrive son. I wonder if Megan will be having a boy or a girl? Hmmmm.

how hillareious!!! this sure gave me a great laugh. :) AND how awesome that you get another baby boy.!!! miss youfriend. ;)

Congratulations! Very exciting news and I loved the post. Weston is definitely all boy... and a funny one at that.